How many gender pride and identification flags do you know about?

The ‘complete’ guides to queer pride flags on the internet do little to recognize the multiplicity of gender identities and their respective flags. So, this pride season we thought we would share some flags you don’t see everyday! We have seen transgender, agender, non-binary, genderqueer and genderfluid flags before – but what about the others? Some of you may be thinking- there are more? The simple answer is yes- a lot more. With more gender identities gaining visibility under the transgender and non-binary umbrella, this guide highlights some lesser known non-binary identities and ones that you should know about. Do you feel #genderwoke yet for this pride season? 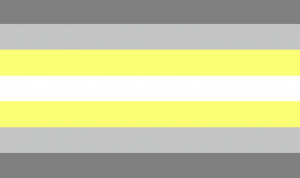 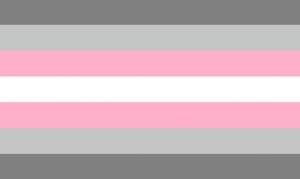 A Demi-girl  (Demi- meaning half in French) describes a person who does not wholly identify as a woman or a girl. Demi-girls may only marginally feel feminine and feel distant from the female gender. People who identify as demi-girls may feel disconnected from several aspects of being a woman or do not feel that they align with the binary gender. Non-binary and/or trans people can identify as a demi-girl. The demi-girl and demi-boy identities are ones in which individuals only feel partially connected to a gender binary. 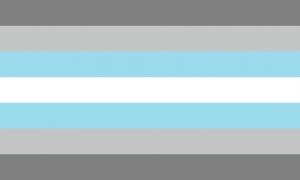 On the other side of the spectrum, a demi-boy refers to someone who does not identify as wholly male or masculine. Demi-boys may feel partially like a man but also may identify as both male and genderless. Demi-boys feel disconnected from the masculine or male aspects of their identity and feel that their identity encompasses other genders. Non-binary and/or trans people can identity as a demi-Boy. 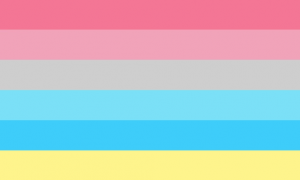 The term genderflux stems from the suffix “flux” which means the process of continuous change. This identity describes one’s perception of their gender as intensifying and varying over time. Genderflux individuals experience a range of intensity in relation to their gender. For example an individual can identify as having 0% gender to 50% aligning with male and to 100% masculine over a short or long period of time. When thinking of genderflux identities, picture gender as a thermometer – an identity that constantly fluctuates in degrees and temperature! 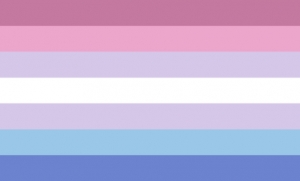 Lavender: any genders that fall outside of the binary 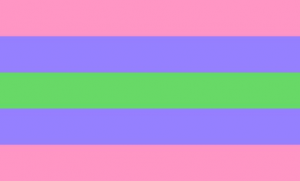 Trigender individuals identify with (and experience) three genders simultaneously or at different times. The three genders typically include male, female and non-binary identities.  The three colors on the flag represent all three of these genders. Trigender can be seen as an equally layered cake that can shift or re-shape depending on the way you like to eat it! 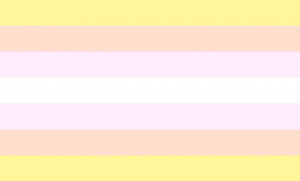 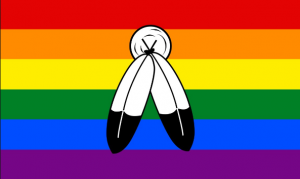 Two Spirit is a term used by non-binary indigenous North American First Nations people. The term Two Spirit describes individuals who possess both masculine and feminine spirits. This is a spiritual and sacred term that can only be used in the context of those cultures. Two Spirit individuals represent the unification of gender identities and expressions under a particular social history and experience. Two Spirit people can identify with varying gender and sexualities across the spectrum and outside of it. However, Two Spirit always represents a third gender or a gender outside of Western conceptualizations. This flag (with the symbol) is represented across all gender and sexuality flags. For example the same symbol can be seen on the transgender flag. The one represented here is the overlay of two feathers and the sun over the traditional gay pride flag. 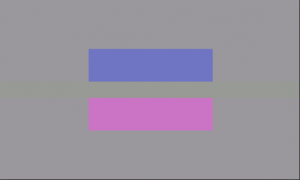 This flag represents androgyny or people who identify as androgynous. Although this is not specifically a gender identity, the flag represents individuals who experience a blend of masculine and feminine traits in their behaviors, presentations and societal roles. Some people identify as androgyne, which is a gender identity that sits between male and female. Some androgyne people identify as non-binary. The equal sign on the flag represents the equal interplay of the two binary genders (male and female) in a person’s identity. The grey area depicts the blending of these traits and anything outside of the binary that is incorporated into their identity. There are several variations of the androgynous flag which reflects the multiple ways to present androgynous! 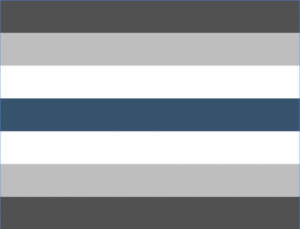 Graygender individuals are gender ambivalent. This means that a person’s gender identity and expression is only partially important to them. Graygender individuals feel a weak desire or inclination to express their gender- they are fine not deeply expressing it! Oftentimes graygender people feel that their gender is indeterminate. Those who identify as Graygender don’t feel gender most of the time and are not that invested in it. You can view Graygender as a longterm vacation away from gender!

Dark grey and light grey: represents the spectrum of experience in “feeling” gender

White: represents the acknowledgment of the notion of gender and lack of investment in it

Dark blue: represents the fluidity and variation of gender

*Definitions were informed by gender.wikia.org – check it out to learn more on genders, flags and symbols.

Ever wondered what star sign your favorite queer digital influencer is and
Congratulations RuPaul’s DragCon on a successful Dragcon. We were thrilled to be a part
RuPaul’s Drag Race has been a favorite of many members of the
Outfest is one of the biggest queer events in the United States,
Bryan Fuller was honored last night at the opening night of Outfest
Go to Top