The ideal queer community is one in which any queer person feels welcome, seen, understood, and included. Unfortunately, that ideal isn’t always (or even often), reflected in reality. White, cis, gay men occupy a position of power and privilege, dominating conversations about queer life, culture, and politics that are in dire need of more diverse voices and viewpoints.

Yony Leyser’s delightfully ragged documentary, Queercore: How to Punk a Revolution, both documents a historical cultural movement in the LGBTQ+ community, and serves as motivation to create more inclusive, diverse spaces today. The film hones in on the homocore (more modernly referred to as queercore) movement of the eighties and nineties, a response to the increasingly violent, masculine tendencies of the punk scene. 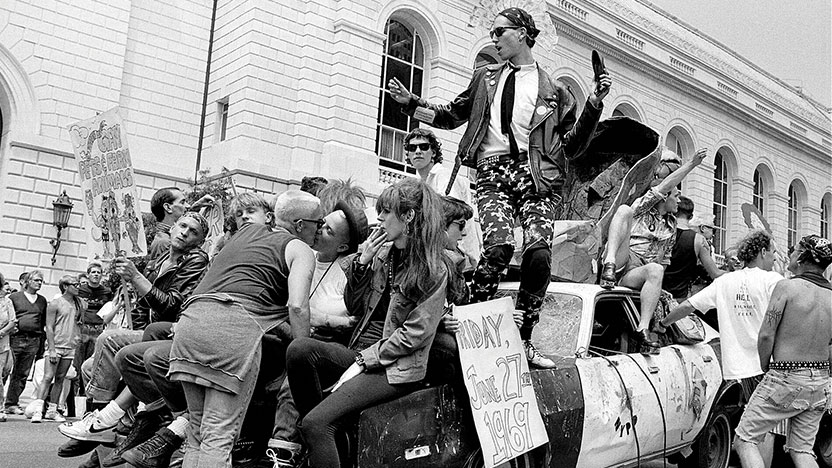 Artists and provocateurs who were at the forefront of the movement – such as Bruce LaBruce, G.B. Jones, and Genesis Breyer P-Orridge – feature prominently in footage taken from their films (which are thrillingly campy, angry, and silly by turns) and in talking head interviews. The story of the rise of homocore is a story of contradictions and good-natured lies – they spoke a movement into existence by pretending it already existed, encouraging lonely queer punks to seek out, and thereby create, communities where they could express their sexuality in ways that grated against more mainstream modes of queer expression.

The parallels of punk and queer culture led to the founding of a scruffy DIY community. The film notes the queer roots of the punk movement, which historically railed against any normative institutions and ideas, including outmoded classifications of gender and sexuality. Through films, zines, music, and other modes of expression, the movement grew in Toronto, San Francisco, and other cities around the U.S. and Canada. Homocore raged against the status quo, doing so with a ready wink and a sense of humor. Zines would even include homophobic bands on lists of recommended music, using queerness as a form of revenge.

Aside from being supremely informative about the rise of the homocore movement – which continues today in various forms – Leyser’s film raises an interesting question about assimilation: should it be the ultimate goal for queer people? LaBruce laments the loss of gay identity being the avant garde, pointing out that as queer acceptance becomes more mainstream, queer identity is diluted and transformed into something barely recognizable. In footage from one of her shows, the performer Penny Arcade tells her audience, “Queer means you have no friends.” As society at large becomes more accepting of queerness, what does that queerness mean now?

It’s an important issue to consider, especially as assimilation might not be completely inclusive. The Log Cabin Republican movement comes to mind, a group that wants to use transgender rights as a bargaining chip – something to be put on the back burner for now while white cis gay men get let into the mainstream with promises to come to the political table later.

The film notes that, while political activists work tirelessly to secure rights and advance the movement for LGBTQ+ equality, the work on the cultural level is also important. Movements like homocore bring visibility, start conversations, and help queer people from all sorts of places find a sense of community. “Find your people,” Gossip lead singer Beth Ditto encourages in a snippet from an interview included in Queercore. It’s perhaps the most pressing course of action for any queer person to take now, as more battles and conversations – both political and cultural – loom ahead. Hopefully, all of us in the community can become each other’s people, and form a united front where we all embrace diversity, encourage various modes of expression, and amplify the voices that need to be heard.