In the early hours of June 28th, 1969, the NYPD raided New York City’s Stonewall Inn. Marsha P. Johnson is credited, along with friend Sylvia Rivera, as being one of the first to fight back against the police raid. This kickstarted the iconic Stonewall Riots and marked the beginning of the gay liberation movement.

On July 6th, 1992, just over 23 years later, her body was found in the Hudson River. The police ruled it a suicide, whereas her friends insisted it was murder.

The Death And Life Of Marsha P. Johnson chronicles the life of this legendary drag queen with incredible use of never before seen archival footage, while following Victoria Cruz, a soon to be retired Senior Domestic Violence Counselor at the New York Anti-Violence Program, as she investigates the mystery of Marsha’s death. 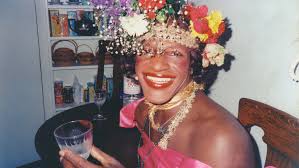 As a transwoman and survivor of years of sexual and physical torment, Victoria’s deep connection to the case is clear from the very beginning. It drives the movie in a direction the filmmakers couldn’t possibly have anticipated when they set out to tell Marsha’s story.

Suicide, dirty cops, or even the mob – Victoria explores all three theories leaving no stone unturned. A mysteriously missing autopsy report and retired cops giving her the brush off do nothing but propel her need to give Marsha the justice she deserves. Friends and family alike share stories about the impact Marsha had on them and the community, and the significance of her life becomes clear as Victoria digs deeper into the murky circumstances of her death.

But equally as important as Marsha P. Johnson is her friend Sylvia Rivera, and the directors don’t shy away from telling her story too. Marsha and Sylvia began the Street Transvestites Action Revolutionaries (STAR) in 1970 and opened a house for homeless people in their community.

One of the most poignant moments of the movie is the footage of Sylvia speaking during a 1973 gay liberation rally. Despite being at the forefront of the birth of the movement, Sylvia and Marsha were banned from participating in the parade that year by the committee who thought drag queens would give it a bad name – so naturally, they responded by marching at the very front of the parade. Sylvia, having waited all day to speak at the rally, finally seized the microphone and gave an impassioned speech pushing for the inclusion of transgender, and all gender-nonconforming people, within the community – something that is still extremely relevant today, and caused an emotional reaction from the audience at Outfest.

While we don’t get an absolute resolution on the cause of Marsha’s death, the film puts a harsh spotlight on the attacks and murders of transgender women that usually go under the radar and are forgotten about. Victoria didn’t want to give up her fight, and we see her in the final scenes of the movie giving a packet of evidence she has collected to the FBI, but Marsha is just one covered up death. At the time of this review, 15 transgender people have been murdered in 2017 alone, and the number of assaults is countless.

The sentencing of James Dixon, who admitted to beating to death 25-year old transgender woman Islan Nettles, is covered in the movie. And while the subject of incarceration and rehabilitation is a hot topic amongst the LGBTQ community, what’s most profound is the lack of support by media and the community alike regarding the high-profile case. Another impassioned reaction from the Outfest audience came when an advocate on screen compared the handful of supporters at the court for Dixon’s sentencing to the massive crowds fighting for gay marriage – why is one issue more important to the LGBTQ community than the other? It’s a question the movie forces us to ask ourselves.

The Death And Life Of Marsha P. Johnson will sit amongst the likes of Paris Is Burning, How to Survive a Plague, and The Times of Harvey Milk as compulsory LGBTQ history viewing.  Marsha and Sylvia should be household names; their contributions and sacrifices for LGBTQ rights must never be forgotten, and now that Netflix has bought the distribution rights, access to the film and the incredible story of these women will be available throughout the world. After all, those who cannot remember the past are condemned to repeat it.

The year is 2010, shortly after the Anti-Homosexuality Bill, commonly known as the “Kill the Gays

When V for Vendetta was first released, it made an enormous impact on me. The thought

Breast-Cancer, has an affect on woman an family worldwide. This disease has
George Floyd was murdered by Minneapolis police on the evening of Memorial
Recently our favorite Bravo host, Andy Cohen was recently tested positive for
Join the experience with The LGBT Sentinel while we celebrate Santa Monica’s
Nearly two decades ago, Will & Grace took television by storm. The
Go to Top

The year is 2010, shortly after the Anti-Homosexuality Bill, commonly

When V for Vendetta was first released, it made an