Fernando Velez is an inspiringly positive, Puerto Rican born writer and creator of Kraven Comics who has been working endlessly throughout the pandemic on the new titles of Class6.  Class6 is a real-world set comic turned science fiction with a cast of LGBTQ representing characters that turn from ordinary people into extraordinary heroes.  I sat down with Fernando over a socially-distanced coffee and got a chance to get into the mind of the creation of this comic series.

Amelia: How were you inspired to create this comic book series?

Fernando: I used to run an LGBTQ magazine before, it was called Kraven Magazine and I had a section there for a fictional writer to write something that was fiction and comedy. One of my writers did an article about the misrepresentation of the LGBT community in the comic book industry. So one day I was thinking about making the section of the magazine about a hero to empower people more. Back then I thought that if you apply three articles of the magazine to your life, you will make your life better. Eventually, I was like, why don’t we create, instead of one character, we create the characters after the groups in our community like bears, drag queens, transgenders. I feel like we are a community full of heroes and we don’t celebrate that enough. That’s why I started with transgenders in the first episode because, you know, back in the day at Stonewall, they fought for our rights and they are still fighting for the right side. We care about them. We hold hands thanks to them.

That’s why I decided to start with her because it’s like, you know, they are heroes of our community. I also have a lesbian, the addict, the twink, the straight ally (we always have a straight ally) and then the dragqueen; which, the story is a lot about her.
After talking more and more to people, they told me I should just write a comic book about it. I never got into Comics because, you know, being a gay guy from Puerto Rico, I didn’t have any character that relates to me. So then, we created this comic book. I can empower the youth to tell you no matter what you’ve been through, there’s people who have been through the same, there are a lot of people that don’t talk about it. We’ve been through it, so that’s why we created Class6. We were inspired by the real heroes of our community, the people surviving. 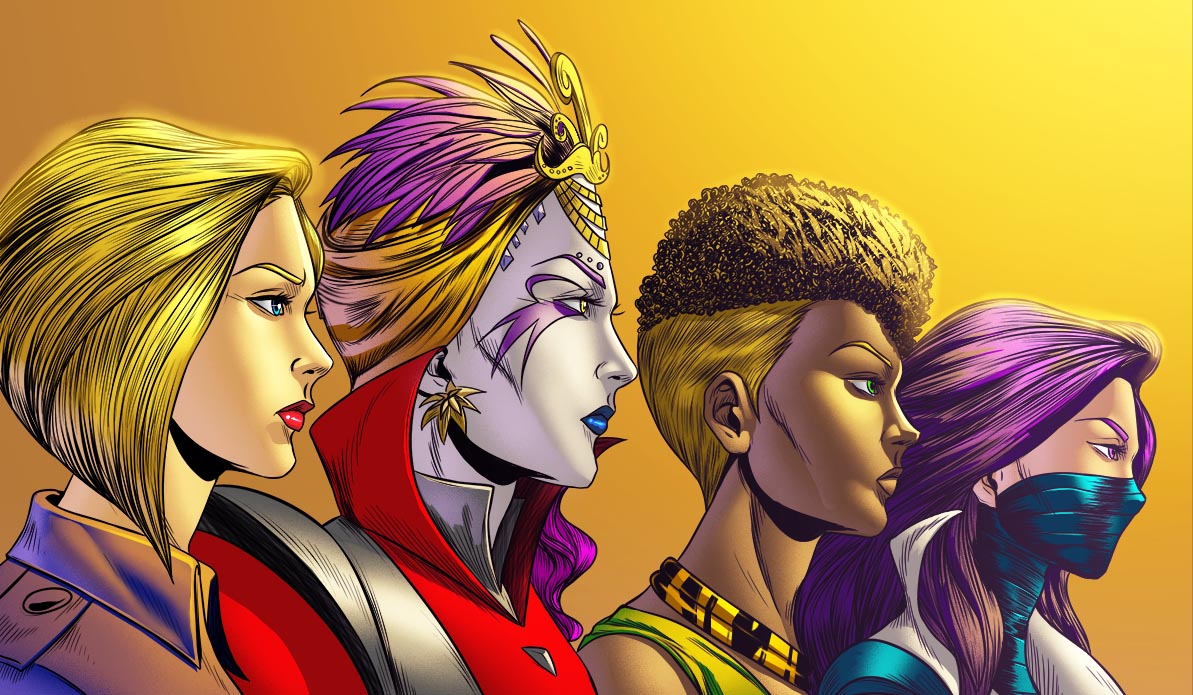 Amelia: How did you get started with comics? What is a little bit of how you got into the writing and what your background is?

Fernando: When I was little it was so tough to be gay in a very Catholic family. Yeah. For me, I always like to put music on whenever I walk, I just imagine another reality. It was a way for me to calm myself and to have hope to imagine the future in my mind. Then, I would pick up a pen and I started writing all my ideas, I just found a way to escape through writing. I remember I stole my Mom’s credit card to buy a movie script writer (also for writers). She was like, “Oh my God, you’re dreaming!”. This ambition, and my goal, eventually is to create an LGBTQ entertainment company that will create movies and documentaries to tell the world everything.

Amelia: What goals do you have for the comic books?

Fernando: These need to be on TV because we need to fight for rights in the entertainment business, we get to represent the stories. I want to make movies. I want to do TV. I want to eventually start getting land somewhere and start building a studio where we can film, for example like CNN, but the gay version. Yeah. We’ll talk about gay news around the world. We want to have correspondents everywhere. I want to be able to create an empire of entertainment.

Amelia: Who are your influences? Can you want to elaborate how the characters represent real life situations?

Fernando: I will say I am influenced by real people, like when I interviewed transgender kids and they wrote letters to the magazine about their experience. That’s how I know it’s more inspirational. That’s what has influenced me to actually write the stories and write the characters. For example, you know, one of our characters was thrown on the street for being transgender by her dad and had to be homeless. She was being beat up on the streets and trying to kill herself. You know, (some cultures) in Africa they believe in corrective rape, so, if you are lesbian, they believe that by raped or your father raping you can cure you from homosexuality. Often they either get AIDS or get pregnant. So in this case, she got pregnant by her own father.

So, she’s pregnant by her dad and we see that point of view because we often say, “Oh my God, these people are bad.” We don’t see what happens behind them in their past. Yeah. So we’re going to show things like that so people can have more kindness and be more aware. The way that we can approach this problem that society has is by understanding better. We want to tell you that you can get out of it and there are people who believe in you, you can become a hero, too, no matter what you’re going through life. Yeah, so that’s what we get so inspired by is real people.

Amelia: How has your audience responded since the debut of Class6?

Fernando: We got a lot of really good AND really bad responses. We actually launched like, maybe, two years ago. We started with the first episode and as we grew the artists we were like, okay, let’s do it again. It was a good reaction from LGBT people. A lot of transgender people would come and say things like, “Oh I’ve never seen a representation of me. You know, I’ve been through that and been kicked out or a lot of people who have been raped.” For example, they have come out, you know, come forward and said, “That’s something like that happened to me. I have never talked about it. Where’s that leave me?”

We hope to motivate others that you know, it gets better. What was the reaction? Some people were very nasty and sent me messages and gave bad reviews because these comic people say we are sending youth the wrong message or trying to influence them. It’s really bad. This is very hateful, but, at the same time the gay people come out and start fighting with the haters, too
They’ll say this one represents me and I really liked her character and level so they’re gonna start fighting with the with the hateful people. Those people will always be there but that’s why I think companies are afraid to get titles for us. Well, honestly, the more haters the better, you know haters are fans at the end of the day and they prove that the comic book is needed.

Amelia: What is the best part of your process, or which aspect do you find the most satisfying while creating the comics?

Fernando: The most satisfying? There’s two. When I write it; because I get so creative and I just cover all the walls in paper. Yeah, and then I’m just like a machine writing ideas out, this idea goes here, this idea goes there and I just love that because I’m entering this fantasy world. I am giving life to characters, like playing God to the feeling of how the story moves, I love that part.

The last part I love is when we get to see the final product. It’s like, what I had in my mind for the series, this is like, actually IT, and it’s the artist’s first comic book! Yeah. So, for me, it’s like, what did she see? Did she see the same things that I’m seeing? The characters came out so perfect. It’s exactly what I saw, the issue is designed and she’s like, this is what it’s going to be.
Wow, I don’t have to tell her much to do as we just always approve. I just love writing.

We’re launching a new title by summer. It’s going to be the character’s ancestors. It takes place back in the 1600’s when the slave trade was happening. It’s about the history and the background of people. ‘m going to work with my team and the former art director and she’s gonna be coordinating these characters with me for this title because it’s gonna be about religion and also about black community. I have a group of people who are gonna review everything to make sure we’re not offending and to make sure that everything feels right, especially when it comes to race and religion.

It’s hard to write this, you know, some gay people be like, oh, why don’t you have a person like this or of this gender. This is my way. I’m one person creating six characters at a time. Yeah, sometimes this art will represent everybody, but eventually, there’s going to be another character that is going to represent more. This is the introduction, the beginning.

Amelia: Where can we find copies of Class6 by Kraven Comics?

Fernando: We do all the distribution ourselves because we’re very small. Got accepted by a distributing company, but it was crazy. We don’t need to spend like $20,000 to probably make like a thousand dollar profit. We just list everything you want on the website for print edition details. You can find Class6 by Kraven Comics on Google Play, iTunes, comixology, but the website is the best.

Amelia: What do you see for the future of the comics?

Fernando: We’re working now on episode nine. We take four months to make one episode. That’s why it’s so important for us to create more time for each episode, every month we’re releasing two to three episodes. Big companies are greedy. It is so hard for a small publishing or Indie comic creator to make it because people are used to the come and go they want the price of the big companies and to write in our style. It is probably using all their own printing company and they do all of that. We have to do this on our own, you know, it’s very hard. So I would say, support us if you can, even in the comments.

We’re creating something as big as them because we are probably going to have about 10-15 titles from the same story in the same universe. We plan it from the beginning to make everything so we can make so many movies from all the titles. The possibilities that we have are crazy.

Check out Class6 Comics on www.kravencomics.com and follow them on their social medias @kravencomics 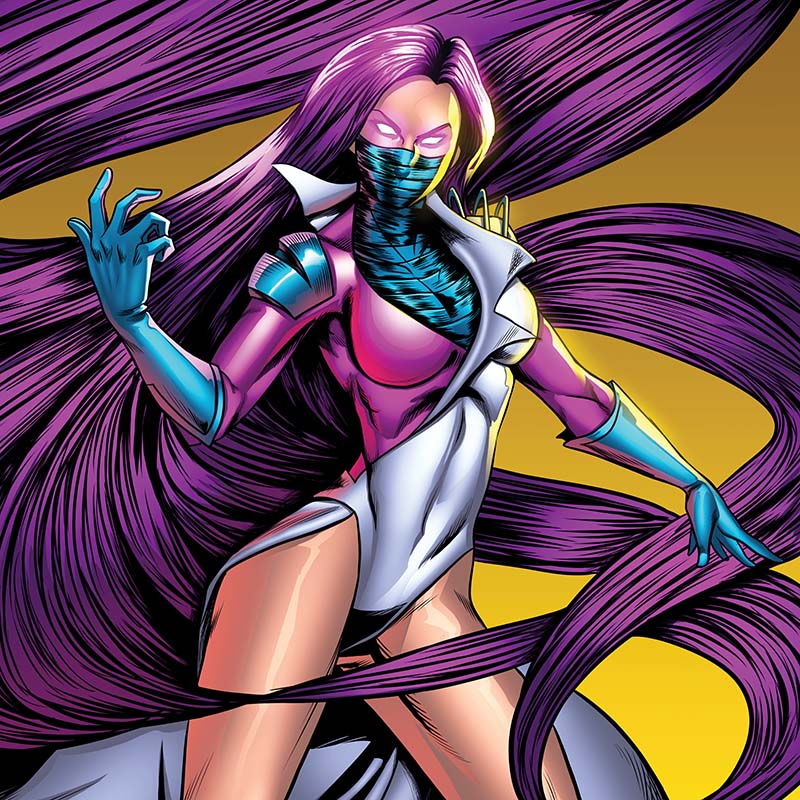